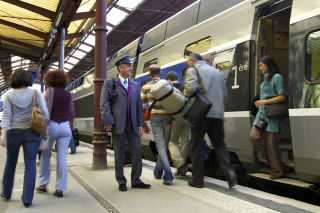 The French Railways should sell low-cost TGV tickets from 2013: the price of a one way ticket could be less than 25 euros. RTL confirmed yesterday that the TGV TGV tickets will market low-cost in return for a "trip less enjoyable."

These tickets will be offered at prices below 25 euros for the same price for buyers and regardless of the reservation period.

These trains will start from the railway station of Marne la Vallee to Montpellier and Marseille via Lyon.

The objective of the French Railway is to travel the maximum one on board via four oars Duplex: these trains will not be equipped with first class or bar as usual.

For the french Railways, it's youthful image, especially among young people: they often abandoning the train because of the excessive prices of TGV preferring lately carpooling or even plane.

The new offensive from airlines such as Easyjet and Air France on domestic flights is probably also one of the reasons for launching this offer by the Fench Railways.

Easyjet has opened new bases in France earlier this year as well as Air France.

It is not certain that this system is sustainable in the long-term the TGV network is already in deficit if one takes into account the high cost of the rail network managed by Networks of France and whose fees increase each year.

An investment of 10 millions euros

The cost of this project is estimated at 10 millions euros: the french railways plan to make a profit by 2017 on the offer by transporting 1.6 million passengers in 2013 and 2.5 million in 2020.

Ultimately, these all-out offensive of the SNCF and airlines should promote public transport, especially as the cost of toll motorway companies made road trips prohibitively expensive in France.

On a trip from Paris to Bordeaux, the cost of tolls shall be equivalent to the cost of gasoline, an aberration very French!