Eurostar will offer Wifi in 2012 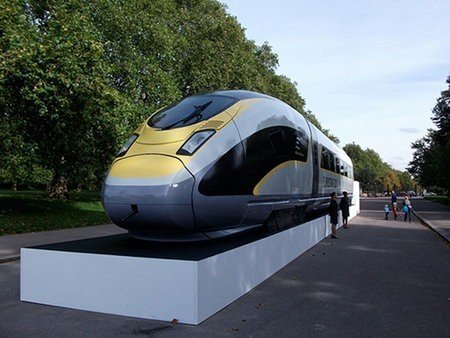 Travelers taking the Eurostar will surf the Internet using a WiFi network next year. WiFi will be installed in the Eurostar under the renovation plan of the operator. Eurostar plans to invest 700 million pounds in new trains.

Travellers taking the Eurostar will be able to use wifi to surf the internet onboard from early next year, as the high-speed rail operator undergoes a £700 million fleet renewal and refurbishment programme.

Speaking to Business Traveller, Eurostar’s head of commercial development Reuben Arnold said: “All of the trains in the whole fleet will have wifi – we are stripping them right down for the refurbishment and business passengers have been asking for wifi for a while.”

The refurbishment of Eurostar's existing fleet will begin in September this year, and there will be a progressive roll out of the new-look trains from early 2013.

Wifi will be provided by Nomad Digital, with Eurostar stating that the technology will allow passengers to "enjoy a high speed connection to the internet at all times throughout their journey, a seamless switchover at international borders and connectivity wherever the customer is seated and whenever it is required".

As well as the redesign and refurbishment of its existing 27 trains, ten new E320 trains will be rolled out from mid-2014 (see online news October 7, 2010). All of Eurostar’s trains will feature interiors by Italian design house Pininfarina, known for its work with Ferrari.

As well as wifi access, the new design will offer an “infotainment” system.

Arnold said: “Passengers can access the internet but also information and video clips about destinations and the train.”

The infotainment system will not be streamed through seatback screens. Instead passengers will use their own devices to connect to the Eurostar wifi and download content through a portal.

“It will allow customers to stream content to their own devices – laptops, iPads, iPods, smart phones.” said Arnold.

Initially the system will not offer films, as passenger feedback commented that the journey times were not long enough, but Arnold added: “Movies is certainly not something that we have ruled out – particularly for longer journeys.”

The cost of wifi access and the use of the infotainmnent system has yet to be announced.

Eurostar recently refreshed its check-in and security areas at Paris Gare du Nord (look out for a special report in the print edition of Business Traveller later this year) and its Brussels Midi lounge is also getting a new look.

Arnold says: “We are refurbishing the Brussels business lounge, partly because we are seeing an increase in the number of passengers as a result of increased connections, but also to make it more of a business environment.”

The refurbishment is timely as the cross-channel train operator prepares to face increased competition.

Although Eurostar currently dominates the high-speed line linking London and Europe, Deutsche Bahn plans to operate routes including Frankfurt to London on the route from 2015.

Arnold said: “At the moment the competition, Deutsche Bahn, is planning to operate via Brussels, and in terms of Paris we are not aware of any new entrants in the near future.” For more information see eurostar.com.